Ammonium nitrate, (NH4NO3), a salt of ammonia and nitric acid, used widely in fertilizers and explosives. The commercial grade contains about 33.5 percent nitrogen, all of which is in forms utilizable by plants; it is the most common nitrogenous component of artificial fertilizers. Ammonium nitrate also is employed to modify the detonation rate of other explosives, such as nitroglycerin in the so-called ammonia dynamites, or as an oxidizing agent in the ammonals, which are mixtures of ammonium nitrate and powdered aluminum. 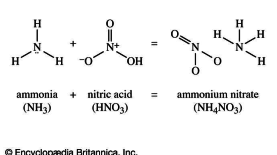 Ammonium nitrate is a colourless crystalline substance (melting point 169.6 °C [337.3 °F]). It is highly soluble in water; heating of the water solution decomposes the salt to nitrous oxide (laughing gas). Because solid ammonium nitrate can undergo explosive decomposition when heated in a confined space, government regulations have been imposed on its shipment and storage.